Recently, I heard economics prof. Dr. Hans Christoph Binswanger, who specializes in growth dynamism, mention that when God made the world, on the sixth day he declared that what he had produced was good, and therefore rested, and did not go back to make readjustments. “Not us,” said Binswanger, “we wake up each Monday and start all over.”

I would argue that this insatiable need to make more, do more, create more, may come from a misalignment, a misunderstanding of what people really want and need. Perhaps the silver lining in the housing crash and resulting economic downturn is a more value-oriented focus and revisiting of Mies van der Rohe’s dictum “less is more” or rather Buckmister Fuller’s “do more with less."

But something about Mark Bradford makes people and institutions want to dream big. The Mark Bradford Project first began at the MCA by introducing Mark to the staff. However, he immediately switched it around and started asking the staff who they were and what they did. Then he asked them, since it was a community residency, how working at the MCA, their skills, and their resources could help the community? If you really want to build a community, it’s not enough to just do your job. You need to do more. Our Mark Bradford Project Team worked on every aspect of the exhibition and project through this lens, breaking down departmental silos internally, and externally connecting Mark to communally engaged artists, teachers, and community leaders. Building bridges, laying infrastructure, we thought we did it all and more. At the same time, Mark pushed the young artists at Lindblom High School and YOUMedia, to go bigger in concept, scale, and ambition. However before he did this, he first looked at each of their works, listening to each explain what it meant, and what it expressed. Only then did he push them to spend more time with their ideas, to stretch their goals, to dream big, and to increase their scale and ambition. Then Mark approached the MCA and knowing we could also go bigger, he prodded us saying that now that he had pushed the students, we needed to show their work in an exhibition.

This wasn’t easy. More seems to be easy when you are in charge of what is more. Now we had to find a gallery - in this case a Chicago Loop Alliance Pop-Up gallery in the center of the city - and then do everything that we were already doing at the MCA for Mark’s show, but twice. And of course, everything had a twist because it was offsite. Our van was towed, we had to rent a special 20-foot ladder, enlist Lindblom volunteers to help paint the 20-foot space, which took until 2 am, and then our lease was almost cancelled. But when the work was installed and the students and parents and community that we had connected with during The Mark Bradford Project came to the opening, the magic, the people, the connections that the Project had developed were tangible, visible, and the students’ work rivaled anything coming out of Chicago’s art programs. That extra bit - the more - could be felt in the gallery with people from all walks of life connecting through art. For Prospect.1, an exhibition of artwork installed throughout New Orleans in 2008 to bring tourism to the city after Hurricane Katrina in 2005, Mark knew he wanted to make a work in the Lower Ninth Ward. The area, ravaged by the hurricane, seemed to be in the most need of tourist money, yet no other works were being presented there. Like at the beginning of his Project at the MCA, Mark began by asking the people living in the Lower Ninth Ward what they needed. Instead of help they said they needed money so partnering with the Lower Ninth Ward Village, the Make It Right Foundation, and the Holy Cross Neighborhood Association, he donated a painting to L9 art center, and auctioned a work to provide them with $60,000 of funding using what he called "career capital” which is exactly what he had asked the MCA and its staff to do.

In the economic downturn, we are all asked to do more with less, but we shouldn’t forget that we all have “career capital” that when connected with others, can bring more to our communities and our lives. What more can you be doing with your career capital? – Tricia Van Eck, Coordinator of the Mark Bradford exhibition at the MCA, and Artistic Director of 6018 NORTH and The Happiness Project. “On our first day together we explored the exhibition Mark Bradford. While looking at Mark’s work, the topic of titles was raised. Together we questioned the ways that labels might contribute to our interpretation of Mark’s work.”

I run a studio, not a classroom. A feature on the exhibition and the residency in The Art Newspaper.

Time Out Chicago’s Summer Preview and Q&A with Mark, both by Lauren Weinberg.

The Kansas City Star art critic Alice Thorson’s “…art shows that are worth a road trip.” 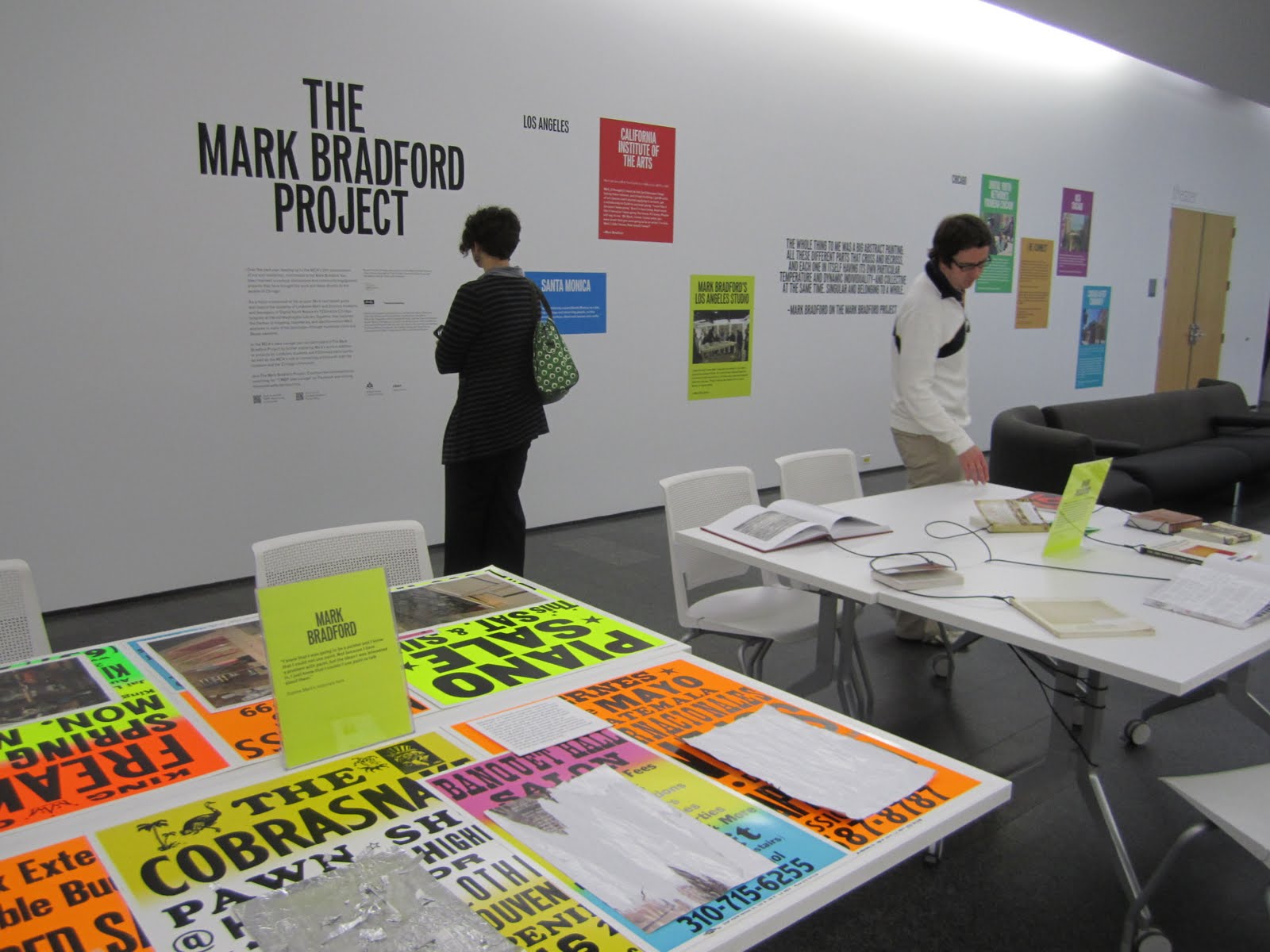 My practice is décollage and collage at the same time. Décollage, I take it away; collage, I immediately add it right back. It’s almost like a rhythm. I’m a builder and a demolisher. I put up so I can tear down. I’m a speculator and a developer. In archaeological terms, I excavate and I build at the same time.
— Mark Bradford, Art21 interview, “Politics, Process & Postmodernism”

When Jacques Derrida died in 2004, I was studying his work in a visual culture class at NYU. His obituary in the New York Times treated deconstruction like a nerdy revenge: nobody can understand deconstruction. My professor at the time pointed out that, at the least, we should try.

When I’m working with students and teachers in museum education, I’m often looking for theoretical sparks as ground where conversations around artworks can sprout. More specific than ‘analysis’ or ‘unpacking,’ deconstruction points to the paradox of simultaneous destruction and construction. Something new can emerge only when space is created for it by undoing other systems, an unraveling process Derrida sometimes described as de-sedimentation. Pulling in ideas from deconstruction can be useful in developing a close read for looking at objects, a way of looking that keeps us from trying to pin down a single interpretation for an artwork.

Some artworks are particularly fruitful for engaging in this process. Mark Bradford frames his work in this language of breaking down and building up—“décollage and collage at the same time.” In Bradford’s studio practice, there is a real physical enactment of the deconstruction of a text, where the text is his own social and physical environment: he pulls objects out from their contexts, leaves gaps, pulls them together into a new format, erases certain patterns, and constructs new ones. De-sedimentation and sedimentation. Décollage and collage.

Bradford’s approach opens up some new ground for our work with educators in the MCA’s Teacher Institute this year. What new spaces emerge when we are willing to apply this process to our work as makers, thinkers, and teachers? How can we engage with Bradford’s process, not only visually, but as a mode of social engagement? Are we willing to complicate, rather than more smoothly define, our use of dialogue as educators and artists?

This is what I’m working on right now: looking at Bradford’s work and words and considering their relevance to creative educators. His approach is complex, embedded in his rich personality, and approaches social hierarchies in a way that sparks new questions when translated to teaching. These questions aren’t easy to answer. At the least, we should try.

— Annie Heckman, teaching artist and MCA artist guide. Bradford’s work is the focus of this year’s High School Teacher Institute, Break Down/Build Up: Change through Dialogue in Teaching and Making, and will be featured alongside Joseph Cornell’s work in the Elementary Teacher Institute, Everything Talks to Everything Else: Joseph Cornell Unlocks New Modes of Dialogue.

For the past six months, the MCA’s video production team has been working hard to document The Mark Bradford Project. We have interviewed dozens of people involved in the project and made trips all over the city, and even to LA, to capture footage of the project in progress. Our goal was to put together a video, to be played at Mark’s exhibition opening, that told the story of the important work that had already taken place during the residency.  Enjoy!

(Re)Connect features artwork created by 15 students from Lindblom Math and Science Academy, a Chicago Public School, and six teenagers from YOUmedia, a drop-in digital and media program at the Harold Washington Library. The exhibition includes photographs, paintings, sculptures, installations, and works in a variety of digital media, including sound and video. Inspired by Mark Bradford’s work and his practice, students at Lindblom responded to the related themes of journeys and mapping. Students at YOUmedia responded to specific works by Bradford, reinventing and remixing to create their own artworks.